Want to Learn How the Pentagon Works? Then Play This Board Game 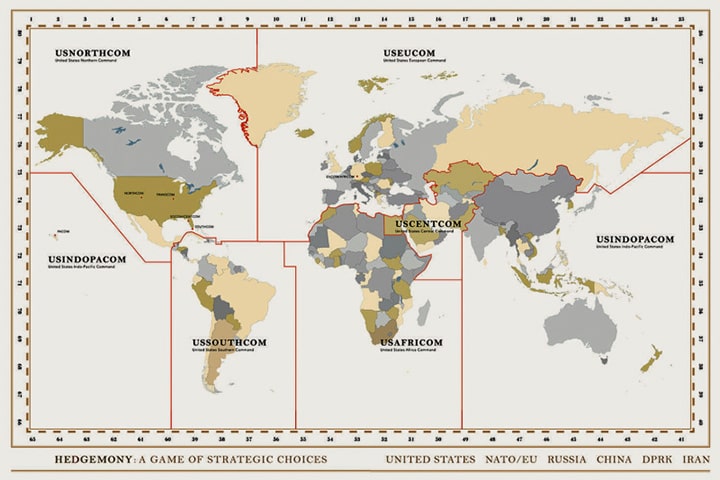 28 Sep Want to Learn How the Pentagon Works? Then Play This Board Game

Posted at 05:23h in Current Events by WebDesigner

A new game meant to help the U.S. government write the 2018 National Defense Strategy shows what happens when resources and commitments collide.

If you are someone who’d like to learn how to create a defense policy that balances strategic goals, military means, and a tight defense budget, there’s a board game for that.

The ink drawing of the Pentagon—surrounded by little tanks and planes—on the game box is the first clue that Hedgemony: A Game of Strategic Choices is no ordinary tabletop game. It’s published by Rand Corp., the federally funded think tank known for wonkish policy papers and mathematical analyses. “Rand has been making games since the 1950s,” said Michael Spirtas, a Rand scientist and one of Hedgemony’s designers. “But we’ve never made one for sale to the general public until now.”

In fact, Hedgemony wasn’t initially meant for the public either. Instead, the U.S. Defense Department used it to help write the 2018 National Defense Strategy. But the designers at Rand had a bright idea: Why not repackage it as a teaching tool for aspiring defense professionals at graduate schools of public policy and the military staff colleges? “There are very few places where people who are interested in defense policy can see the Department of Defense writ large,” Spirtas said. “Usually people stay in just one silo, like working on readiness or defense posture. It’s very rare to get a broader view of the DoD.”

Hedgemony is a strange beast and not just because its title is spelled with a “d.” (“The game forces players to adopt hedging strategies that trade off between different priorities,” Spirtas explained.) It’s part family game like Risk, part paper wargame of the type favored by military history buffs, and tinged with a bit of Dungeons & Dragons-ish role-playing.

There is a Blue team (the United States and the European Union/NATO) and a Red team (perennial Pentagon nemeses China, Russia, Iran, and North Korea). Players are assigned specific roles, with the most important being the U.S. defense secretary and the secretary’s staff of assistants and intelligence briefers. The game focuses on Blue, with Red there just to make the game educational and challenging.

Further proof that this is a Pentagon-focused game is the map. Hedgemony may be the only nonclassified board game that divides the world not by political or geographic boundaries but rather by the U.S. military’s regionally based combatant commands, such as Indo-Pacific Command, European Command, and Central Command.

Blue deploys its military forces between these commands using small cardboard tokens. There are also Event Cards drawn randomly to simulate global and domestic developments, from coups and civil wars to terrorist attacks and technological breakthroughs.

Victory is determined by Influence Points that players gain and lose depending on the actions they and their opponents take. (Those familiar with the popular Cold War board game Twilight Struggle will notice the resemblance.) To gain these rewards, each nation has a pool of Resource Points that it can spend building and maintaining military forces, redeploying troops between the combatant commands, and investing in researching various capabilities such as long-range missiles, missile defense, and special operations forces.

Sound simple? If Hedgemony were simple, it probably wouldn’t be a very realistic simulation of how the Pentagon works. For starters, every nation—even those on the same team—has its own goals. This means that even though the United States is mostly aligned against the Red nations, it is also competing with Blue Europe. There can be multiple winners, but somebody has to lose: For example, Europe loses if Russia achieves its goals, and the United States and China both lose if North Korea wins. Which means that while the United States and China may be adversaries in this game, they also have reason to cooperate on some issues.

The United States starts with a much larger pool of Resource Points to spend than the other nations, but most of that budget is consumed by maintenance of existing forces. To research new technologies or modernize its military means giving up something else. The other nations have far fewer resources (North Korea has one-eighth the U.S. total), but they also have no global commitments.

To give the flavor of the game, consider a single turn in a demo game that Rand conducted. (I had a minor role as an intelligence briefer for the Red team.) The Blue team must formulate a defense policy at the outset: In this game, Blue announced that it would focus on maintaining the United States’ technological edge and on creating a small rapid reaction force to deal with global crises, even if doing so came at the expense of existing forces. Small numbers of troops would be based in Europe, Korea, and the Indo-Pacific region, but U.S. troops would be withdrawn from Centcom to save money and create a reserve based in the United States.

The Red team then drew several Event Cards and could play one this turn: China, for example, could choose to invest in anti-ship ballistic missiles or take a more aggressive stance in the South China Sea. In Hedgemony, the Red team must function as both adversary and mentor to Blue. Red has to brief Blue on its intentions and reveal what cards it drew, but it doesn’t have to disclose which card it is going to pick. The United States, in other words, has an inkling of what its adversary is capable of but not what it would do. It’s the classic dilemma between assessing an opponent’s capabilities and figuring out its intentions, something every Pentagon decision-maker faces.

SOCOM: Bulk of war casualties may be operators but SOF readiness is at all-time high